My husband and I went down to Melbourne last weekend. Not for the Melbourne Cup, like most people that weekend, but to attend PAX. PAX is a gaming conference. I had to do something nerdy with my nails to both live up to my name and as a tribute to PAX. I knew right away that I wanted to pay tribute to my favourite video game, which really isn't hard because I don't play many video games. But this is the one that I have spent BY FAR the most time playing. That is Animal Crossing.

I actually wanted to do an Animal Crossing manicure for a while. I had even sketched out something about six months ago and it was the reason that I bought a brown, the only neutral that my mom didn't have in her collection that was at my disposal. I just never got around to making it because I had other manicures that I wanted to do any nothing that it specifically went with, like a holiday or other event.

Before I go into detail, here are overall finished products. 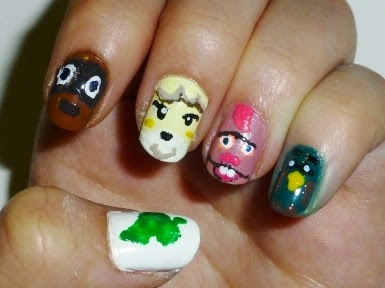 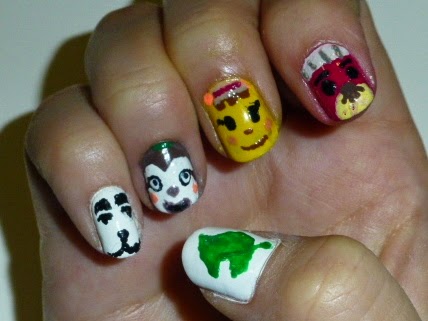 This manicure used A LOT of different polishes and I'm not even counting the number of ones that I had to mix! I definitely did not keep track of how much mixing I had to do to get just the right colours. I would have lost count even if I had!

The polishes used were (top row, left to right) Blackest Black by Designer Brands, the matte end from Pinstripe by Revlon, Koala Bear-y by OPI, Bananarama by Kmart, Summer Rose by boe, Envious by Kmart, a frankenpolish I made by mixing Belsize Park by nails inc and French White Creme by Wet 'n' Wild, and Bonna Blue by Fresh Paint.
(bottom row, left to right) Guava by Fresh Paint, Sparks Will Fly by China Glaze magnetix, Amazon Amaz-off by OPI, Snow Me White by Sinful Colours, Tiramisu by Sephora, Coach Ella by Fresh Paint, and A-piers to be Tan by OPI. 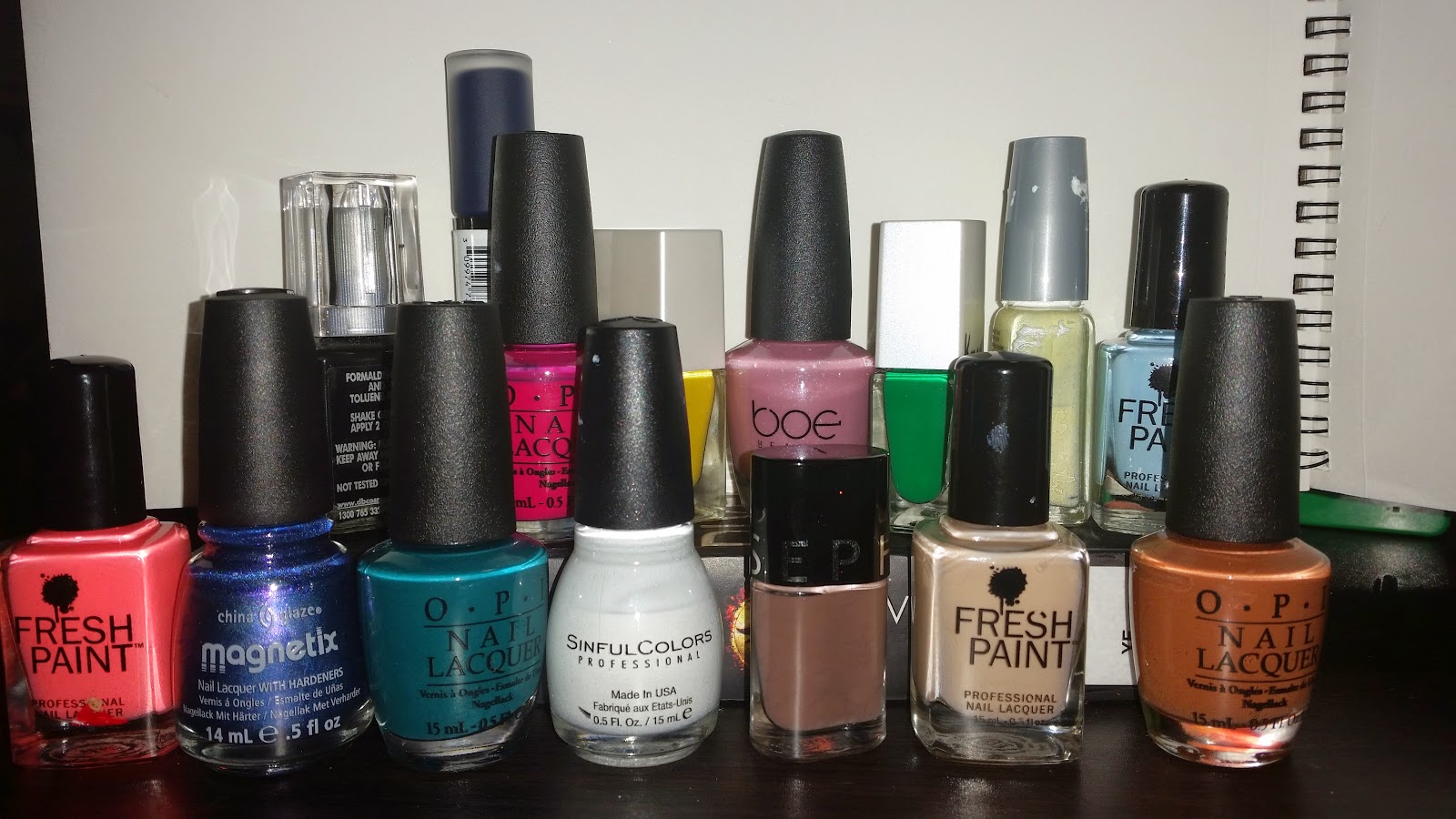 I actually started off with K K Slider. He's a dog DJ that sometimes plays live music in the town. He was on my right pinkie and I'm not sure why I thought that it was a good idea to start with him. I have a tendency to mess up my right pinkie by my nail getting stuck behind my ring finger. I ended up needed to fix him several times, so I was glad that he was a simple black and white design. 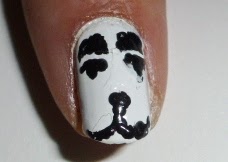 The next one is Leif. A sloth that owns a gardening centre in your town and will "help" you with weeding if your town gets too many weeds. He wasn't too hard to do, but I realised while spending lots of time looking at his picture to replicate it, that he's very strange looking. Then the other day I saw a picture of a sloth and realised that he's really spot on. 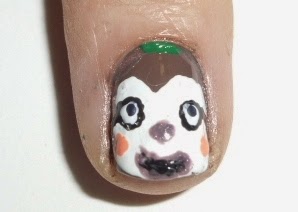 This nail could be Nook or the Nooklings. They are chipmunks in the game. The dad owns the place where you buy your home and the Nooklings are twins that own the store. This nail is the main reason that I bought that brown. The inner dots of his eyes are actually blue, so I used the matte end of pinstripe for them. 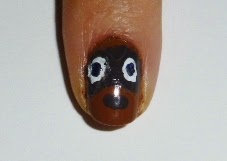 Isabelle is probably the most iconic character of the game. She's the secretary to the mayor, which is the player. She's a yellow Shih Tzu. I only had two really bright yellows and her base colour definitely had to be a very pale yellow. I decided to take my old bottle of white polish that I didn't like and add some yellow to it. The yellow was from my old yellow that was running out. I just added a touch of yellow to the bottle and shook it. I did this until I got the desired colour. I was very happy with it. The lighter brown for her hair and mouth was also a mixture of one of the browns and the pale yellow mixture. 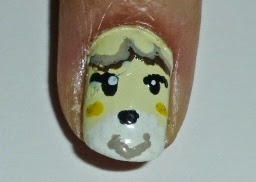 Brewster is a teal pidgeon and, as his name suggests, he runs the coffee shop in town. He was pretty simple. The only issue was that I had to be careful with Amazon Amaz-off because it stains my fingers pretty well. 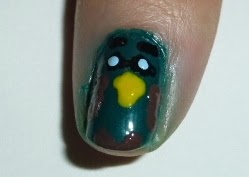 This is Katie. She is a wandering kitten that gives you a gift if she ends up in your town and you take her to a friend's town. My nail actually does look quite a bit like her character, but I wished that I had chose a different character. I think she looks too much like a lego when you zoom in to just her face. 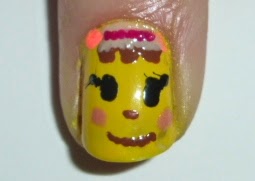 This guy is Pascal. He's a pink otter and acts sort of like a stoner. When you go diving, sometimes he pops up when you find a scallop and will trade something for it. I did some more mixing for the yellowish area around his mouth. His beanie hat was also composed of some mixtures. 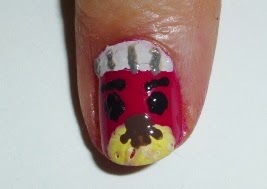 Finally we have Dr. Shrunk. He is an axolotl, which is not something that I had ever heard of, but they're pretty weird looking animals. Dr. Shrunk owns the club where KK Slider performs. If you come in the afternoon before the club opens and give him fruit, he will tell you a joke and then your character learns how to make different facial expressions. He also has an iconic dance and is my husband's favourite character. 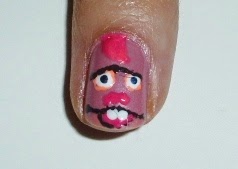 I kept it really simple with my thumbs. They were both just the logo of Animal Crossing: New Leaf. 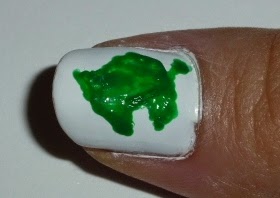 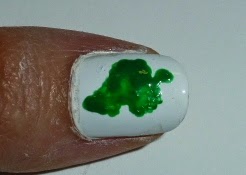 And here's some more of the finished product. I was actually really happy with these nails, especially considering that they were all different characters that involved a lot of different polishes and mixing and I didn't start the characters until after 10pm and have been suffering from exhaustion. The reason I waited that late was because I wanted to paint them after I had washed up from dinner so that I didn't ruin them but we also had Bible study and didn't get home until late and we left early the next morning. At least I slept on bus/train on the way down to Melbourne. 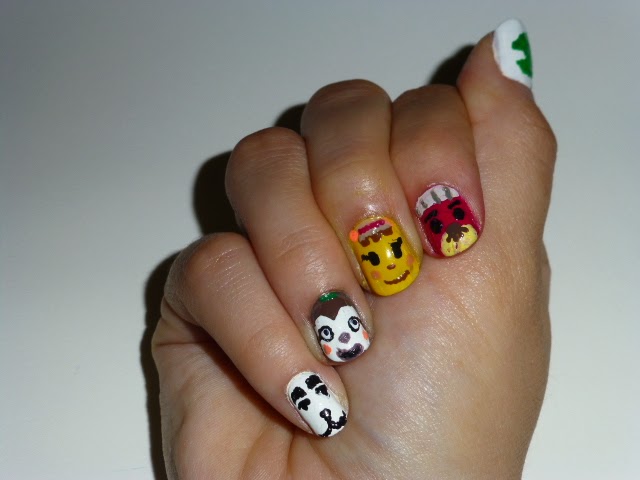 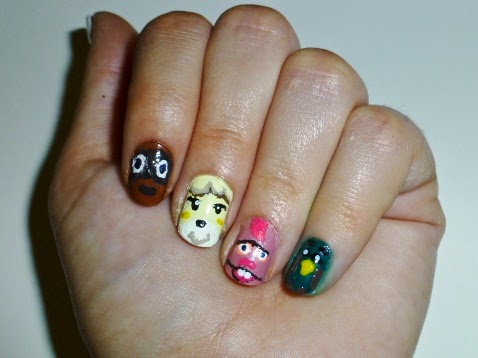